Record Lectures – The days of trying to write down notes as fast as possible in order to keep up with your professor are long gone. Not only does this negatively impact your concentration, but it can also cause you to miss some important information. Today, we have a voice recorder available at all times on most of our portable tech gadgets. 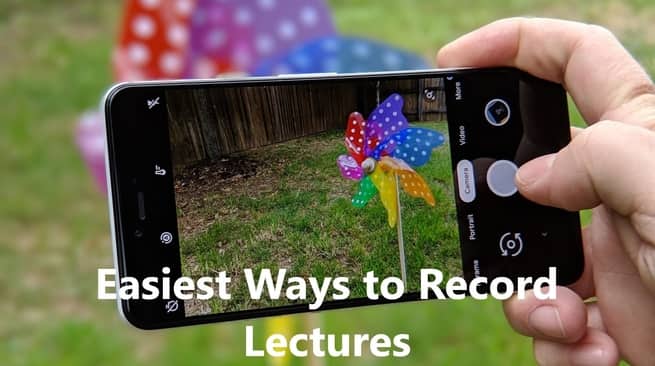 By recording lectures, we can use technology to our advantage in order to help us maximize our learning potential. Having something to listen back to can also aid in understanding particularly difficult subjects. Also, note-taking can be quite stressful when you consider the fact that you have to process all the information you hear while writing it down.

In contrast, a recording is a set-and-forget method that takes most of the effort away and lets you focus on the important aspects. There are three main ways to record lectures, each with their own respective characteristics.

Using a smartphone is the most economical way to go about this since you won’t have any added expenses. Pretty much everyone has a smartphone nowadays, and there’s no shortage of free, useful applications as far as voice recording goes.

Most modern phones running Android or iOS already have a built-in app of this type and require no prior setup. It can be booted up and ready to go in just a couple of seconds so that you don’t miss even a single second of your lecture.

Additionally, you have a smartphone on you at all times, which means that you can relisten to the lectures whenever you have free time. Whether it’s on a bus or while you’re taking a walk to your university, smartphone’s accessibility is unparalleled.

The only issue that could arise is if your professor doesn’t allow smartphone use during his/her lectures, in which case you’ll have used another method.

While they’re certainly a lot bulkier to carry around, most professors allow computer use as a way to study/take notes. One of the largest benefits is an ample amount of professional recording software, both free and paid.

The built-in laptop microphones are also quite good, especially if they’re from a reputable manufacturer such as those on Apple’s Macs. Also, the convenience factor comes into play here – you use a laptop during the exam prep anyway, which means that you can relisten to the lectures on-the-fly while you’re doing all the other work.

Unfortunately, the included recording software is quite subpar on most of the operating systems. Due to this, a third-party specialized program could be highly beneficial – for starters, Audacity is an awesome free and open source recording app.

Audacity is primarily made for Apple computers but has different versions for other operating systems as well. It’s lightweight and beginner-friendly, but with a lot of advanced features for the more tech-savvy users.

Notes and recordings are both useful in different ways, and it would be awesome if we could reap those benefits in unison. This is exactly what Audext allows us to do using its automated transcription technology. With Audext you can convert mp3 to text automatically. Instead of focusing only on a visual or a verbal aspect, Audext combines them into one ultimate solution.

Lectures usually last for hours – recording and storing every single one will quickly eat up all of your storage space. It’s also quite a waste since there’s a high chance you won’t need all of that material at once, only bits of crucial information. Fortunately, you won’t have to do this.

When you upload an audio recording to Audext’s online transcription service, the spoken words are converted to text with the use of AI technology. All of that output first gets sent to a web-based editor, where you can check it for correctness and edit in on-the-fly. The text is formatted accordingly in order to maximize readability and help you quickly track down all the useful information.

Audet does all of this in just a couple of minutes for an hours worth of audio. If you’re unsure about the correctness of a certain word, simply click on it and the audio player will automatically go to the moment when it was spoken.

Once you like how the final output looks, it can be saved in two different formats. The Microsoft Word extension option is very useful when you need concise and formal notes to present to your lecturer.

Audext’s initial price is free for the first 30 minutes of your audio. Once you’re assured that it’s capable of producing high-quality results, it’s a small investment for the amount of convenience that you receive.