Netflix has become almost a necessity in recent years. How else will you be able to get the recent releases that everyone is talking about? However, the country you live in has an impact on what you’re watching on Netflix. What your German friend can watch is not the same as what you can watch in the United States. To get around this, we’ll reveal how to access geo-restricted Netflix shows. 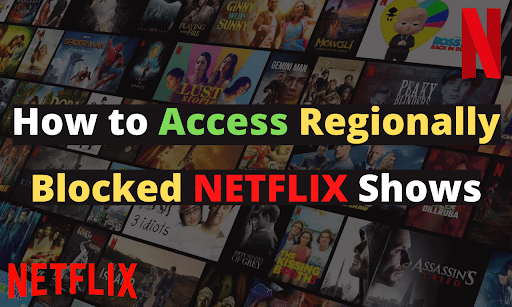 All you have to do is to download a VPN to watch Netflix in a different country or if you want to access geo-restricted Netflix shows. A VPN will mask your current location and replace it with one of your chosen locations. ExpressVPN is our top pick option to consider because they are offering a 30-day money-back guarantee and fast streaming speed to make sure it’s exactly what you’re looking for.

How to Change Netflix Region or Country

Your Netflix library is determined by your location. The majority of Netflix content is geo-locked, which means you can only watch a portion of the entire Netflix library of TV shows and movies. This is usually due to the agreements Netflix has made with the content owners.

To watch content that isn’t available in your area, you need to trick Netflix into thinking that you’re in another country by changing your Netlfix location. Your IP address, which is used to identify who you are and where you’re from online, is used by Netflix to determine your region.

To access Netflix shows and movies from a different location, you must either change your IP address or mask it in some way. You have a few options in this regard. You could mask your IP with a DNS proxy or change it with a VPN.

Both accomplish the same goal of accessing geo-blocked content, but they differ in a few key ways, particularly in terms of privacy and security. We recommend using a VPN because it is the most effective way to protect your online privacy.

How to Change Your Location on Netflix Using a VPN

It takes a little work to get Netflix working from a different location. However, once you’ve done that, you can use the VPN to change your Netflix region or protect your privacy.

Both a DNS proxy and a VPN will allow you to change your Netflix region. DNS proxies, on the other hand, aren’t as reliable or secure as VPNs. If you want to watch Netflix from a different location, the best and safest way is to use a VPN.

“DNS” is the abbreviation for “domain name system.” Its job is to transform the IP addresses that are used all over the internet into readable addresses that you can type into your browser. It acts as a link between your computer and the website you’re attempting to access.

It also informs these websites about the IP address you’re using based on your location. This is what Netflix uses to figure out which country you’re in and what content to show you.

Despite the fact that a DNS server is provided by default, you can connect to a different DNS proxy from anywhere in the world. This will allow you to watch shows and movies from other countries that are not available on your Netflix account.

A VPN (a virtual private network) changes your IP address completely. It also encrypts your data between the VPN and your computer, ensuring that no one can see what you’re looking at. It’s a great way to hide your online activities while also gaining access to Netflix regions.

A DNS proxy does not change your IP address, which is one of the reasons we recommend a VPN. Some companies with an interest in your data can figure out your true IP address behind the proxy.

The only disadvantage of using a VPN is speed over a DNS proxy server. VPNs are slow in speed because your data is encrypted.

The Best VPN to Access Netflix Shows and Movies

When it comes to using a VPN to access geo-blocked Netflix content, we look for a few characteristics. Your information must be secure, and the VPN must be fast and reliable. Such as cost are also taken into consideration.

Most importantly, the service provider must bypass Netflix’s VPN ban. Netflix has a tendency to block large groups of IP addresses. It suspects that you are connected to a VPN which you may recognize as error M7111-5059.

ExpressVPN is our top pick, primarily because it is the fastest and has the best customer service, but other VPN companies like NordVPN, SurfShark, and CyberGhost also allow you to access geo-restricted Netflix shows and movies from anywhere in the world.

ExpressVPN is at the top of our list of the best VPNs available. Because of its extensive server list, it’s a particularly good option for accessing Netflix from another country. You can change your Netflix library to almost any country no matter how small. Thanks to thousands of servers of ExpressVPN in 94 different countries.

The advantage of having so many servers is that if Netflix blocks one of them from that country, you can choose another one to watch the same shows. ExpressVPN is a good option if you want to watch content from a less well-known country.

It is the fastest VPN we’ve tested. This is true if you’re going to watch Netflix. Your internet speed will naturally drop when you connect to a server that is far away from your current location, but ExpressVPN mitigates this as much as possible.

Its customer service is also excellent. Its live chat is available to assist you if you need an answer right away. However, live chat may not be aware of technical details, so you can request more information by sending an email to the support team.