The digital world was and still is a fascinating, exciting place to be, but things have changed in the last few years. Many of us have become increasingly aware of the fact that our personal information online isn’t always protected in ways that we expected. What about the big tech giants? We use their products and services, but is Facebook really free? Does Google know everything I do? What about Apple privacy issues? 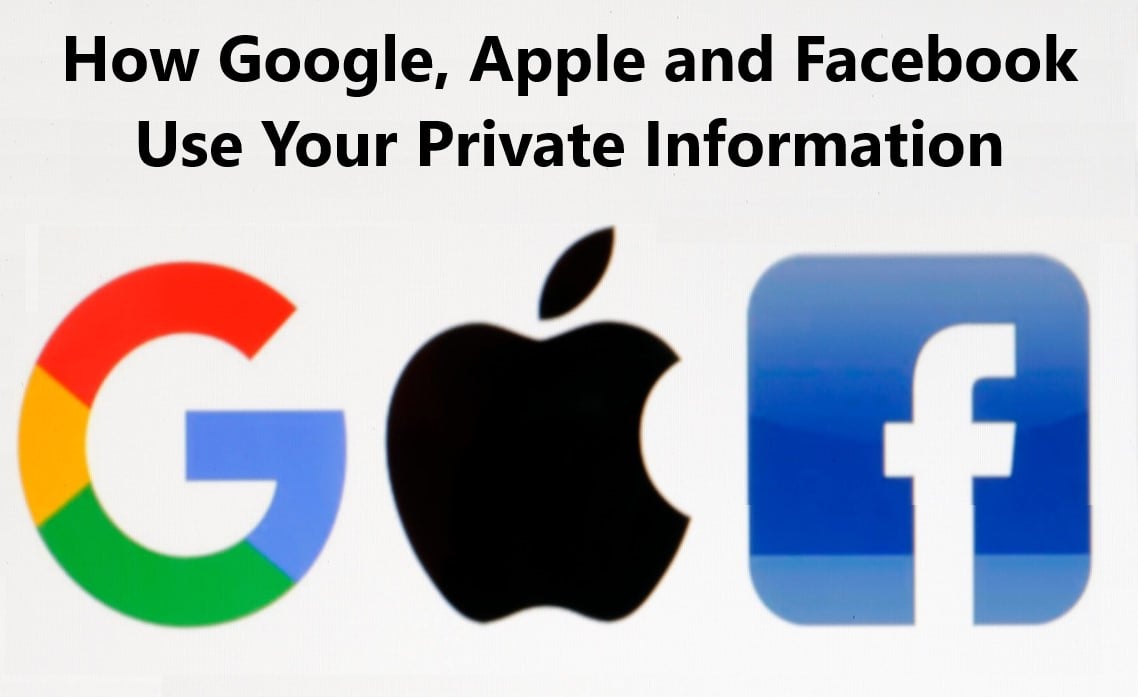 More people want to know exactly what these tech companies do with our data and what they know about us. Let’s find out.

The short answer is a definitive “yes”. There’s no doubt about it anymore, especially due to the numerous controversies that Facebook has been involved in regarding users’ data. In a nutshell, Facebook collects whatever information you put on the platform. There’s a lot at stake here, especially since the big data giant doesn’t have the best reputation for keeping their users’ information secure.

If you look at it that way, many aspects of the popular social media experience are tracked, logged, and collected on Facebook servers. They’ve got all that information at their disposal in digital space.

There’s a bonus to all of this and it’s not a good one. Facebook also tracks your browsing history. Sounds problematic, doesn’t it? Of course, it is. By this, we mean that the data giant tracks what you’re up to even outside of their platform through cookies. They’ve got information like your IP address, the browser that you use, as well data on the ads that you’ve clicked on.

Does Facebook sell your data? Well, Zuckerberg tells us that he doesn’t sell your data to third parties. He admits, however, that the platform keeps your data inside its digital boundaries (we’ll ignore the recurring data leaks for now) but uses your information for its ad-targeting system.

Other than the question about whether the platform sells its users’ data or not, Facebook has been involved in some questionable activities. They’re also known to save all your images for their facial recognition program – a project that started a while back.

Using artificial intelligence, DeepFace is a “learning facial recognition program” and functions to recognize human faces among digital images. That’s what we know it can do, at the least. Who’s to say what else it’s currently capable of?

But worse things happened at Facebook involving its users’ data. 700,000 Facebook users were shocked to find out that the platform actually used them to perform psychological experiments. Yes, you heard that correctly. Many users were not aware that these experiments took place, but it’s a frightening display of what the company is capable of.

How Does Google Collect My Information?

One of the most obvious ways that Google collects your information is through its search engine. But again, like Facebook, think of all the other apps and platforms that the company owns and which you use.

Every time you search for a location on Google Maps, or wherever you go with your device, it’s tracked – even if you aren’t logged in. If you use Gmail, each email you send out or receive is stored and read by Google. YouTube is also owned by Google, so it’s got information on everything you watch, whether you’re just watching to entertain yourself or going down a conspiracy theory rabbit hole.

All the apps that you’ve downloaded or even searched for are logged through the Google Play store, and Google Assistant saves every question you ask Google. Your schedule, events, conversations, and occasions are all saved on Google servers via G Suite and Hangouts, too.

Along with all their apps, many of which you likely use, Google also collects data through IP address tracking.

What Does Google Do with My Information?

First, with all the data that they collect about you, using their very “holistic” methods, Google basically uses deep learning and customization to create a well-rounded picture of you as an individual. Similar to Facebook, they claim that they don’t sell your search history and other data. But your search history is, in fact, used to create a more personalized experience for you as you traipse across their platforms.

This contributes to targeted advertising, just like Facebook does. It all makes sense now when you think about why you’re getting an advert on Facebook for something that you recently just searched for on Google. Still, this big data giant insists that they’re not data brokers, either.

They mean, specifically, that third parties won’t be able to identify you, but that they might get their hands on data wherein your search history and other information can be found. Also, all your searches and activity on Google are used in their trend spotting. If you’ve ever used Google Trends, you might wonder how they know exactly what’s trending in terms of popular searches all over the world. Data collection is how.

Does Apple Collect My Data?

Apple is a big tech company – of course, they collect your data. If you’re an Apple user, your data is collected via Apple services of every kind, as well from any Apple device. Yes, this means that your health and fitness information is also collected by Apple.

Does Apple Sell My Data?

This is how Apple is somewhat different from their tech giant counterparts, Google and Facebook. Apple uses your data to serve you ads, yes, but it does so differently. While Apple uses your data to show you ads, it doesn’t sell that data to other advertisers. And over the years, Apple has put a lot of effort to make them different from other companies by taking the safety of user data more seriously. They launch regular updates and features, which are modeled to protect privacy. But if that works – we’ll see in the long run.