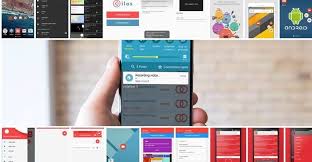 Screen Recorder Android application is required by many users of Android smartphones. Many have complained that when they wanted to record Android screen, They need to root first in the operating system. But In this article, I am telling you about best Android Screen Recorder Apps that you can use without root.

Here is a list of 7 Android screen recorder application that you can download via the Google Play Store. All apps below are free, some have restrictions such as watermarks and record limited duration.

Screen Recorder 5+ is the best Android Screen recorder Apps can be used directly without root if using Android Lollipop or above. Screen Recorder is a free Android App for record screen .You can create promotional videos, make tutorials or record help videos complete with an audio smartphone.

How To Remove Stock, System App On Android Without Root

ilos screen recorder has a feature where you can directly upload video directly to YouTube, Google Drive, Dropbox, and Facebook. This Screen Recorder can be used without having to root on Android Lollipop version or above.

One Shot screen recorder is free, but the video resulting from the application of this android screen recorder will have a watermark. If you want to eliminate watermark, you must buy the premium version. One Shot Screen Recorder can be used on any operating system under Lollipop , but you must perform root first.

This android screen recorder application has the highest rating in the Google Play Store. Telecine is an open-source application that can be used for free, and developers can develop these applications at will . Notification of the Android smartphone will not show up and interrupt the recording process when using these applications and most importantly is no additional watermark.

Delete All Data From Your Lost Android Phone

Unlimited Screen Recorder screen recorder android application also is entirely free with no limit to the duration of the recording and adding watermark disturbing.

That was some way to record screen android using Screen Recorder Android app that can be downloaded from the Google Play Store and used directly without having to root the Android Smartphone with Android version of Lollipop or above.

If you want to use multiple applications on the screen recorder android Android Smartphone with Android Version Kitkat and or JellyBean, you must root first.