The USB-C connector has been around for a few years now and USB-C ports can be found on all sorts of devices. These include laptops, smartphones and docking stations. All sorts of cables and converters exist to allow us to connect from USB-C to USB-A, ethernet, HDMI etc. However, whilst every USB-C port is physically the same, they don’t all have the same capabilities. You need to be careful with your selections when choosing devices you want to interconnect using USB-C. 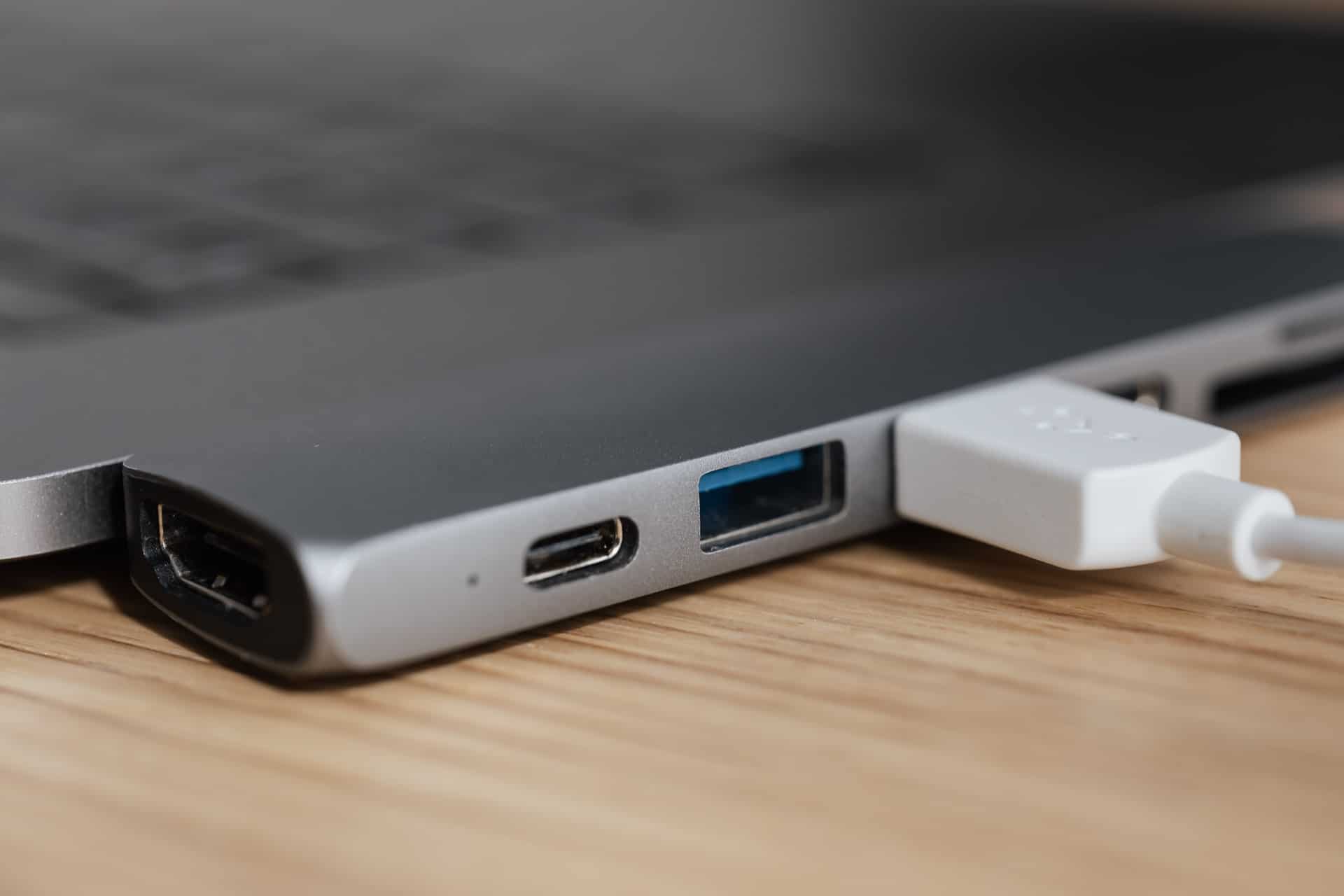 My company offers computer repairs and IT support for both business and residential customers. A recent client had purchased a new HP laptop for use with two external monitors in the reception area of their business. My job was to set up this computer and a number of other computers in different areas of their new office building. The laptop they had been using previously was quite old but it actually had both an HDMI and a VGA connector. This had made it extremely straightforward to use with two monitors. However, the new laptop only had an HDMI connector, together with USB-A and USB-C ports.

At first glance, the job in hand appeared straightforward enough. I connected the first monitor to the HDMI port and purchased a USB-C to HDMI adapter for use with the other one. I wasn’t fully convinced that this would work, particularly after reading the laptop specification which stated that both the USB-A and the USB-C ports were for ‘data transfer only’.

Sure enough, when I connected the second monitor to the laptop via the USB-C to HDMI adapter, nothing happened. The monitor appeared as an unknown USB device in Device Manager, and it wasn’t possible to obtain a suitable driver from the monitor manufacturer’s website.

My next instinct was to utilise a docking station with the laptop. I began investigating the various options available for use with HP laptops. It was extremely tempting just to pop into a nearby store and buy a docking station with USB-C input. This was made even more tempting when the front desk receptionist told me that the sales assistant had suggested this at the time when they bought the laptop. However, I had a sneaking feeling that a docking station wouldn’t work either and I didn’t want to waste hundreds of dollars testing my theory.

I told the business owner that I would go away and investigate the options. By the next morning, I was fairly sure that my instincts had been correct and that it wouldn’t be possible to use a second monitor with this particular laptop. After Googling for possible solutions, and reading plenty of speculative but uninformed opinions, I decided that I would need to ask HP themselves in order to obtain a definitive answer.

I launched a chat with HP support for small and medium business customers. As the subject of the chat, I entered ‘I need to know which docking stations are compatible with my HP Notebook 15s-fq1085tu’. The following chat ensued.

Debbie: Thanks for contacting HP. My name is Debbie. Let me check on that for you.

Me: I’d like to use it with 2 external displays & so I’m wondering if there is a compatible docking station

Me: Ok that’s what I thought

Me: Is there any way in which it can be used with 2 external displays?

Me: One over HDMI & one over a USB with a converter?

Debbie: Can I help you with anything else?

Me: Yes see the questions I just asked 🙂

Debbie: It can run 1 with the HDMI port, but the USB ports are transfer only.

Me: Ok that’s what I thought

Me: Thanks for your help

Debbie: You are welcome!

Debbie: Thanks for contacting HP! We appreciate your business and feel free to reach out any time you have a question. You will receive a copy of this chat transcript in your email. Have a great day!

As I had suspected, there is no way in which this particular HP laptop can connect to two external displays. This was a useful learning experience for me as I had previously assumed that, with the correct adapter, almost anything is possible. As it turned out though, the USB ports on this laptop are indeed for data transfer only and cannot be used either to drive an external display or a docking station. This means that they can only be used for data transfer with devices such as flash drives, mouses and keyboards, and printers.

In order for a USB-C port to be used with an external display, the computer itself must support video technology over USB-C. Specifically, it must support DisplayPort over USB-C.  There is plenty of chatter online that would suggest that, as long as you procure the correct adapter, it will work. However, the signal transmitted over the USB-C port must use the required protocol and no adapter can make this happen if the computer itself isn’t generating the appropriate signal.

In the same way, you can’t assume that a docking station with a USB-C input will function with your laptop just because the laptop has a USB-C connector. Physical connections with the same form factor don’t necessarily transport signals which are compatible with both sides of a connection.

All of this means that you need to select your hardware with care, depending on the functionality you require. Unfortunately, the internet is filled with speculative suggestions that, with the correct adapter, anything is possible. However, if a device doesn’t support DisplayPort over USB-C, or Thunderbolt 3, then no adapter in the world is going to make this possible.

The client I talked about earlier made the decision to replace the laptop in question with a superior model which would provide the functionality they needed. Sometimes it’s necessary to spend a little bit more in order to achieve the outcome you require.

This USB-C implementation guide was written by Norm McLaughlin, founder of Norm’s Computer Services, a local computer repair and IT support business in Brisbane, Australia.